As outlined in the project proposal, the original plan was to implement at least two new spectral upsampling methods in Colour. Here's an overview of work done so far:

I took the dataset published alongside Otsu et. al (2018) and colorcheckers included in Colour, about 1300 reflectance spectra in total, reconstructed them using various methods and compared them with the original data. I used CIE Standard Illuminant D65 and two metrics:

Below are chromaticity diagrams with error heatmaps drawn over them. The color of each square bin represents the mean error of samples lying inside the square. The numbers above the diagrams are, in order, the minimum, maximum, mean and standard deviation of the errors.

In the previous part I mentioned that reflectances reconstructed using this method can exceed the [0, 1] range and violate conservation of energy. Indeed, I could simply ask it for an imaginary color and get a weird, unphysical spectrum.

What's interesting is that this doesn't happen in practice, when upsampling real data. Out of almost 1300 reflectances I tested, I found only one bad reconstruction. Using the original clustering, the result for magenta from BabelColor Average colorchecker reflects 100,6% of light at 730 nm. Clipping this value to 100% creates a tiny color difference, orders of magnitude smaller than the just-noticeable difference. 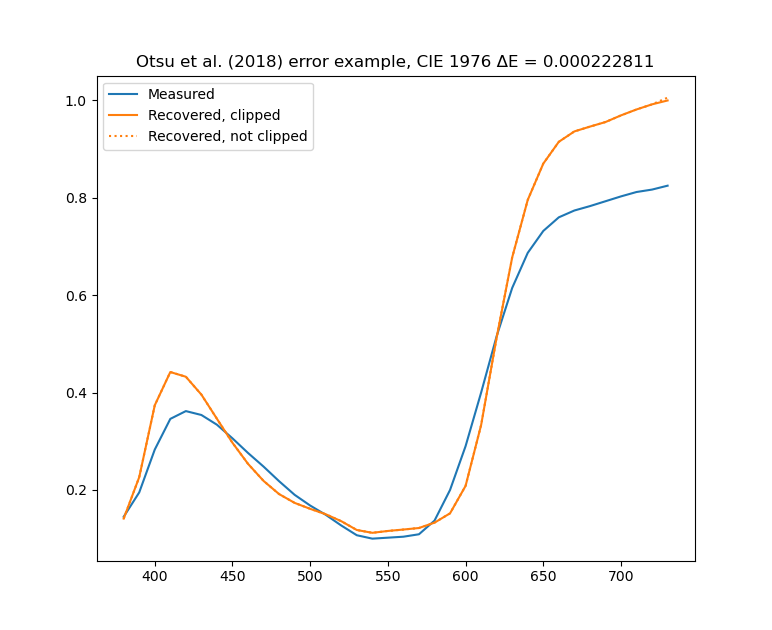 You can see the small difference between the clipped and unclipped reflectances in the upper right corner of the figure. (Click to enlarge.)

Many methods have this property of being able to create perfect metamers, so looking at ΔE's isn't very interesting. In a future post I'll take a look at MSE (mean square error), which quantizes differences between spectra themselves, and compare a few methods.

1)
ΔE is defined as the Euclidean distance between colors in CIELAB color space.